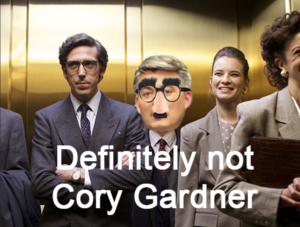 Colorado Sen. Cory Gardner (R-Yuma) was busy today firing off Tweets about trade agreements and speaking in front of an empty Senate chamber about the four corners of Colorado and…something.

What Gardner was NOT doing today is the same thing has has NOT been doing for months: Commenting in any way, shape or form on the pending impeachment trial against President Trump.

Justin Wingerter of The Denver Post has noted Gardner’s refusal to talk about the most important political subject in the entire country, but he’s not alone in trying to track down the elusive junior Senator from Colorado. As The New York Times reported today:

For Republicans in difficult re-election races — with the possible exception of Ms. Collins, who is her own brand in Maine — the political calculations are complex. Senators Joni Ernst of Iowa, Thom Tillis of North Carolina, Martha McSally of Arizona and Mr. Gardner all face tough contests in states that are not nearly as conservative as they used to be…

…The pressure on Mr. Gardner mounted on Monday when the Lincoln Project, a group of Republicans that describes itself as “dedicated to defeating President Trump and Trumpism,” targeted him in a brutal advertisement that described the Colorado senator as “just another Trump servant — weak, frightened, impotent — a small man, terrified of a political bully.”

“Colorado voters want a fair trial in the Senate and honest leadership,” the ad said. “Either do your job, or Colorado will find someone who will.”

In the Capitol on Tuesday, Mr. Gardner was making himself scarce. When Republicans wrapped up a luncheon featuring a discussion of trial procedure, he zipped out a back door and headed for a little-used elevator, avoiding a throng of waiting reporters.

“I’m sorry, he’s got to get going,” an aide to Mr. Gardner told a reporter who followed him, as the elevator doors opened and the senator slipped inside. Then Mr. Gardner jumped in, begging off any discussion of whether he could be the elusive fourth vote who could upend hopes of a quick acquittal of Mr. Trump. [Pols emphasis]

Gardner’s, um, “spinal problem” is quite a contrast with another prominent member of Colorado’s Congressional delegation. This morning, House Speaker Nancy Pelosi announced that Rep. Jason Crow (D-Aurora) was among seven Representatives chosen to prosecute the House impeachment case in the upcoming Senate trial.

One man is standing up to fulfill the Congressional duties set forth in his oath of office. The other is hiding from reporters in elevators. If you’re embarrassed by the ridiculous charades of Sen. Cory Gardner in this critical moment in American history…well, you absolutely should be.