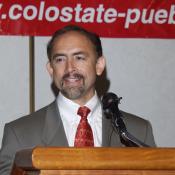 Denver Major John Hickenlooper has reportedly chosen CSU-Pueblo President Joseph Garcia as his running mate in the race for Governor.

Garcia is not a name that is familiar with most Democrats, which is probably fitting given that Hickenlooper — though a Democrat by affiliation — is really more of an Independent candidate. Garcia was named President of CSU-Pueblo in June 2006 after serving as President of Pikes Peak Community College beginning in 2001. According to a bio from 2006:

He previously worked as the Rocky Mountain States representative for the U.S. Department of Housing and Urban Development, executive director of the Colorado Department of Regulatory Agencies and as a partner in the Colorado Springs office of law firm Holme Roberts & Owen. He obtained his law degree from Harvard Law School and his bachelor’s degree in business from the University of Colorado-Boulder…

He joined the board of directors of the Colorado Housing and Finance Authority from 1994-1999 under then Gov. Roy Romer. Gov. Bill Owens appointed him again in 2001.

There are a lot of ways we could discuss the potential strategic reasoning behind choosing Garcia (he’s Hispanic, which is helpful for turnout and to deflect Tom Tancredo’s likely immigration-focused campaign, he could help bring out votes in Pueblo and Colorado Springs, etc.), but since there is basically no chance that Hickenlooper will lose the race for Governor, the most obvious reason is that Garcia doesn’t have a voting record to use in negative ads.

The other curious piece of this whole announcement is about the timing. Announcing your Lt. Governor running mate is one of a few guaranteed earned media hits that a campaign has. Usually a campaign would save this announcement for a lull in the press coverage, or in order to change the subject from an opponent’s attack. There’s really no strategic benefit that we can see in announcing Garcia as his running mate today, since the story will be buried alongside bigger (and frankly, more immediately relevant) stories about Tuesday’s Primary. Perhaps the announcement was made now because Garcia wants to be officially out of his current job before the new school year begins, but that’s the only reason we can come up with for why you would make this announcement now.

And finally…this may be a bad picture of Garcia that we found online, but it sure looks like he was once rocking a mullet.