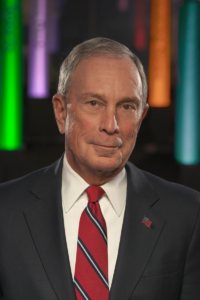 Michael Bloomberg. Because he can afford it, that’s why.

CNN reports and there’s not a damn thing you can do about it:

Bloomberg, in a letter explaining his candidacy on his campaign website, lays out a more moderate vision for the country and casts himself as “a doer and a problem solver — not a talker.”

You see, gentle readers, former New York Mayor, Republican, Democrat, and always gazillionaire Michael Bloomberg has convinced himself that none of the dozen-plus Democratic candidates running for President can “beat Donald Trump!” It’s not a nice thing to say about your own party’s slate of nominees–not nice when you say it either, Michael Bennet–but much like Colorado’s dogged 1% campaigner, it’s less clear how Bloomberg offers anything to differentiate himself from the current pack. Moderates already have Joe Biden, liberals who don’t want Bernie Sanders‘ “socialist” calling card troubling their conscience have Elizabeth Warren–hell, even the pro-billionaire wing of the Democratic Party, presuming the existence of such a thing, has Tom Steyer with much stronger progressive bonafides.

Whether born of vanity or cluelessness, we don’t expect Bloomberg’s late entry into the Democratic primary to factor meaningfully. It’s just another lesson in how many smart, wealthy, well-connected people are out there who have absolutely zero political sense in or around them. Even worse, such figures invariably attract sycophantic yes men to their orbit who are willing to sign up for any fool’s errand if it means a reality-insulated paycheck. The end result is a noisy, expensive distraction. Bloomberg should aspire to a prouder legacy.

Hopefully he’ll at least acknowledge on a campaign stop that Colorado Springs has roads.