Colorado voters will get to decide in 2020 whether or not to remain part of a compact of other states that awards the Presidency of the United States to the winner of the national popular vote. Or, as the Colorado Independent deftly explained, “Colorado will decide by popular vote whether it supports electing presidents by popular vote.”

Proponents of a national popular vote (NPV) believe the current winner-take-all Electoral College system essentially disregards votes for the losing candidate in a Presidential election. Recent history supports this argument. Of the five different elections in which the Presidential candidate who received the most votes was not awarded the keys to the White House, two of them happened in the last twenty years.

“The Electoral College has, at various times, given an advantage to Democrats, Republicans, and the now-defunct Whig Party. Now it gives a clear advantage to Republicans.”

Opponents of a national popular vote — including Sen. Cory Gardner, who donated $50,000 to the campaign seeking to repeal the NPV proposal– publicly argue that dismissing the Electoral College would disregard rural voters (nevermind that this is already happening) and would diminish the power of less-populated plots of land (which we call “states”) in determining the most powerful elected position in the country.

Privately, however, Republicans cling to the Electoral College for a much more simplistic reason: Because right now it benefits them bigly.

According to a new study from the National Bureau of Economic Research, the setup of the Electoral College significantly increases the odds of an “inversion,” in which one Presidential candidate wins the popular vote but a different candidate wins the office itself. Given the current population makeup of the United States, this is a sizable advantage for a Republican Presidential candidate.

In modern elections where one party prevails by just 2 points in the two-party popular vote, “inversions are expected in more than 30% of elections.” That number rises to 40 percent in elections with a 1 percentage-point margin.

Republicans, moreover, are far more likely to benefit from an inversion than Democrats. “In the modern period,” the study suggests, “Republicans should be expected to win 65% of Presidential contests in which they narrowly lose the popular vote.”…

…The Electoral College skews elections by giving a structural advantage to small states. Each state receives a number of electoral votes equal to the number of United States House of Representatives members from that state, plus two. These two additional votes effectively triple the voting power of the smallest states, while having only a negligible impact on the voting power of large states.

Republicans today tend to be clustered together in smaller states, so it is to their great advantage to allow boundaries of land – dirt, basically — to determine winners instead of an overall popular vote.

DIRT IS PEOPLE, TOO

Mitt Romney famously said, “corporations are people, too,” but what about dirt? If you can’t win the hearts and minds (and votes) of Coloradans, then you should court plots of land instead.

For the sake of argument, let’s suppose Colorado decided to create its own sort of statewide electoral college in which each of the state’s 64 counties were awarded an equal vote for the purpose of determining the outcome of an election. This idea has been suggested by Colorado Republicans such as District Attorney George Brauchler, who represents multiple counties in Colorado’s 18th Judicial District:

Post-session, we should discuss why taxpayers fund two legislative bodies whose representation is purely population driven. How different would #coleg be if we reformed the legislature by having a legislator per county in one of the houses? #copolitics

The likely outcome of this proposal floated by Brauchler and other Republicans is actually not terribly difficult to project. But to make the math easier to understand, first we need to examine a similar effect on top-ticket races from the last decade. Colorado voters have decided on 10 top-ticket contests (President, U.S. Senate, Governor) since 2008. Democrats have won 9 of those races, with only Gardner succeeding for Republicans in 2014. If these races were awarded to the candidate that captured the largest number of individual counties instead of a popular vote, the outcomes are completely reversed. 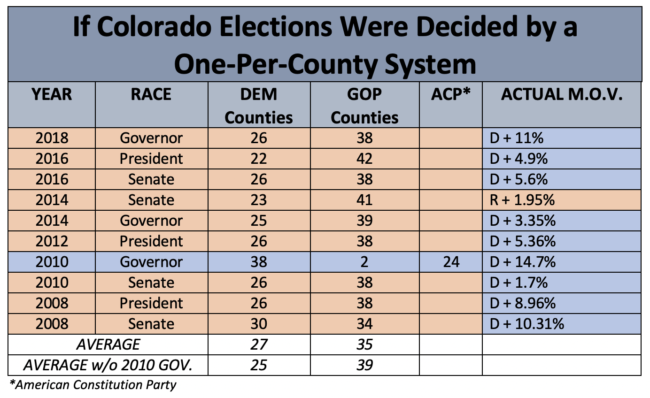 Democrat Jared Polis was elected Governor in 2018 by an 11-point margin over Republican Walker Stapleton, earning the support of 1.4 million Colorado voters. If Colorado had instead chosen its Governor based on the number of individual counties won by each candidate, Stapleton would have coasted to a 10-point victory. In this scenario, a candidate could become Governor by carrying 33 counties – something that could be accomplished by earning less than 100,000 total votes.

This would not have been the only major swing in recent election outcomes. In fact, the only race Republicans would have failed to win in the last decade would be the 2010 Governor’s race, in which Tom Tancredo ran as the official nominee of the American Constitution Party and siphoned off a majority of Republican votes. Take away this fluke election and there is no argument: It would be impossible for a Democrat to win a statewide race in Colorado if votes were allocated according to the winner of each county.

These changes are equally dramatic if you consider electing members of the State House of Representatives on a one-per-county basis, as Brauchler and others have proposed.

Colorado currently divides its state legislative districts to create equal representation based on the state’s overall population. Each of Colorado’s 65 State House districts represent about 77,372 people; Colorado’s 35 State Senate districts are responsible for about 143,691 people. If we changed that formula so that state representatives were elected on a one-per-county basis, look what happens:

Republicans would clearly benefit from a one-per-county allocation of state representatives because there are more red counties in Colorado than blue ones (based strictly on the drawing of county lines). In this scenario, the GOP could hold majority control in the House of Representatives with 33 elected officials representing just 4% of Colorado’s population.

Conversely, roughly 80% of Colorado’s population would be represented in the State House by about 9 people. In a one-per-county system, the 26 Colorado counties with populations of less than 10,000 people would have the same influence as counties like Denver and El Paso, each of which counts more than 700,000 residents.

There’s no good argument for claiming that a fraction of the population should choose the political direction for everyone else, yet this same basic structure is not unlike how the Electoral College works. A Presidential candidate currently needs 270 electoral college votes (out of a total of 538) to win the White House; since electors traditionally award all of their state’s votes to the popular vote winner in that state (only Maine and Nebraska do this differently), it is possible to become President with just 23% of the total popular vote.

While Republicans benefit most from the continued existence of the Electoral College – at least for now — all Americans would have a larger voice in a national popular vote system. As the Washington Post explained in early August:

“Right now, when a Colorado voter fills out their ballot of who they want for president — whether independent, Republican or Democrat — if it’s not the popular choice in this state, then why vote?” said Jessie Koerner, a communications specialist for the League of Women Voters of Colorado, a nonpartisan organization that has advocated getting rid of the electoral college for decades. “Why even make your voice heard?”

Koerner said bypassing the electoral system will galvanize voters who decide to stay home on Election Day because their vote “won’t matter.” It could motivate conservatives who are discouraged or liberals who become apathetic because their states will inevitably vote blue, she said.

There are plenty of Republicans who believe that it would be in their best interest to scrap the Electoral College system, though they aren’t as loud as the other group. For example, President Trump could lose his re-election bid in 2020 if only one state – Texas – were to flip from red to blue, which doesn’t make much sense.

The key here is to understand the real reason that Republicans such as Sen. Gardner get hysterical about ditching the Electoral College — because they understand the disproportionate advantage it gives to the GOP for controlling the White House. Republicans like Brauchler want Colorado to adopt a similar model for the same reason.

Protecting the Electoral College isn’t about Democracy or preserving a “Republic.” It’s about maintaining political power, plain and simple.