Back in July, we took note of an interesting FOX 31 story following up a Republican Party fundraiser in Aspen starring Vice President Mike Pence. As Joe St. George reported at the time, Pitkin County Sheriff Joe DiSalvo sought to collect over $18,000 in reimbursement for security costs related to the fundraiser. After a surprising amount of rigamarole and a round of bad press for the Trump campaign, DiSalvo’s invoice was paid–by donors who wished to remain anonymous.

That’s a big problem, of course, since these were arguably in-kind campaign contributions to the GOP and the Trump 2020 campaign with no reporting to the Federal Election Commission. But it wasn’t a big problem to find out who wrote the checks, whether these donors who requested anonymity knew it or not, because as we noted then Colorado’s open records law made the checks and the checkwriters’ identities a public record the moment they were given to the Pitkin County Sheriff.

Which is where 9NEWS’ Marshall Zelinger picks up the story yesterday:

“Usually, we don’t have this much trouble. And we do ask way in advance, so it doesn’t usually come as a surprise to the hosts,” said DiSalvo. “I usually use that time to contact the hosts and say, ‘this is an impact on my small department, and it does cost a lot of money, could you please reimburse us?’ I’ve never really had a problem, and I’m not saying that this is a problem this time because we did get reimbursed, but it was kind of uncharted waters for me to have to dig and dig and dig just to find out who the host of this party was, and I still don’t know.”

…There is no requirement that the president or vice president reimburse local law enforcement for visits, even if they’re political and not official visits. If someone pays, it’s usually from a campaign account.

Since the payment came directly from individuals and not the Trump campaign, it isn’t tracked by the Federal Elections Commission. Whereas contributions [EG] Kendrick made to Gardner’s reelection campaign and former Congressman Mike Coffman’s 2018 campaign are searchable. Those contributions were made to the campaigns and recorded with the FEC. These payments were not. 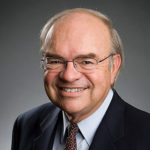 The two donors who wrote equal $9,087 checks and asked to remain anonymous were Mark Horace Love, an Arizona investment banker and (much more newsworthy) Earl G. “Ken” Kendrick, the managing owner of the Arizona Diamondbacks. This is where it gets politically quite interesting, since Kendrick’s family has been long on record as fiercely opposed to Donald Trump–reportedly giving big money to a PAC that spent millions in a failed attempt to stop Trump from winning the nomination in 2016.

Much like Sen. Cory Gardner’s about-face from calling for Trump to pull out of the presidential race in October of 2016 to endorsing and defending Trump today, Ken Kendrick’s about-face from a “Never Trumper” to trying to sneak in-kind money to the Trump re-election campaign presents big and obvious questions. What changed? A good place to start would be with Kendrick’s expansive business networks in Arizona and elsewhere. For example, in July fellow Diamondbacks owner and close associate of Kendricks, Mike Ingram, was targeted by a congressional investigation after allegedly getting “help” on a permit from Interior Secretary David Bernhardt for a southern Arizona home development over objections that it could harm threatened species. What else might be out there to underwrite Kendrick’s change of heart?

One thing’s for sure: somebody at this level of the game, and we’re not talking baseball, should have known better.