After last week’s damaging story from The Guardian documenting what sure looks like a huge violation of Interior Secretary David Bernhardt’s promise to steer clear of conflicts of interest between his current position and his friends and former clients in the oil and gas industry–revelations that came courtesy of emails from Garfield County Commissioner Mike Samson celebrating Bernhardt’s unethical promotion of the Jordan Cove natural gas export project–the Huffington Post reports:

“What benefits us locally will translate into geopolitical and environmental gains for the United States and the world,” the column says…

But while those words were attributed to Scott and Pugliese, they were actually the work of the Consumer Energy Alliance, a Houston-based industry trade group whose members include oil giants like BP, Shell and ExxonMobil. Emails HuffPost has obtained via the fossil fuel watchdog Energy and Policy Institute show that while the Colorado officials wrote a first draft of the piece, CEA heavily revised it before publication.

That line is one of many additions CEA made to the column, and the emails show the inner workings of a larger campaign to win local support for a major liquified natural gas infrastructure project in Oregon. 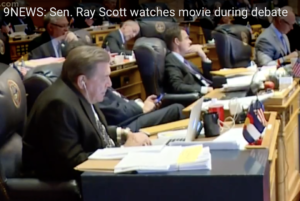 To put it charitably, Sen. Ray Scott and Mesa County Commissioner Rose Pugliese do not top anyone’s list of “experts” in the field of oil and gas development or, well, anything else. Sen. Scott, a fireplace dealer by trade, is the same state senator who waxed idiotic about the “massive improvements in the climate” made in recent decades during this year’s legislative session, and was even caught watching movies during debate instead of paying attention. Pugliese is less known on the east side of the divide, primarily for her work on the National Popular Vote repeal initiative, but Mesa County locals have been documenting her antics in this space for years.

Back in May, readers will recall, Secretary of State Jena Griswold was subjected to an over-the-top roasting by Republican opponents organized by former Secretary of State Scott Gessler after her office sought and received minor edits from Planned Parenthood to a press release condemning the state of Alabama’s recently-passed abortion restrictions. Contrast that to this full-scale rewrite of Scott and Pugliese’s op-ed by oil and gas PR guys–so much that Sen. Scott even responded:

“When you guys edit you really edit…….lol,” [Pols emphasis] Scott responded later that afternoon.  “Overall I’m fine with it,” he added.

We’re going to hazard the guess that the Republicans who lost their minds over Griswold’s trivial Planned Parenthood edits will be a little less incensed this time! But with Colorado charting a course away from fossil fuels while a faction of Western Slope Republicans and energy extraction interests and the Western Slope-born Interior Secretary works surreptitiously against the interests of their own state, this is a story so much more important…it’s just kind of ridiculous to compare them.