Colorado’s David Bernhardt: As Bad As Everybody Thought 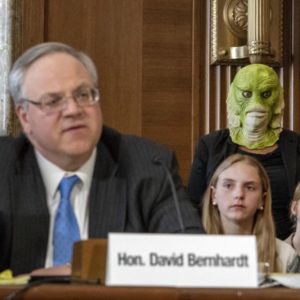 Secretary of the Interior David Bernhardt, who grew up in Rifle on Colorado’s Western Slope and worked at the powerful Brownstein Hyatt Farber Schreck law firm while swinging in and out the revolving door at the Interior Department between Republican presidencies, was confirmed over the dire warning from many who had worked with Bernhardt over the years that he would be a walking, talking conflict of interest as Interior Secretary–totally beholden to his former employers and clients, to the extent that it would simply be impossible for him to ethically do his job.

Well folks, as The Guardian reports this week, that’s exactly what he’s turned out to be!

The US interior secretary, David Bernhardt, is promoting a fossil fuel project for which his former employer, a lobbying firm, is a paid advocate, e-mails obtained by the Guardian suggest.

Experts say Bernhardt is probably violating ethics guidelines issued by the Trump administration with the stated goal of “draining the swamp”. Based on these rules, Bernhardt should be recused from specific issues involving a former client for at least two years.

The Jordan Cove Energy Project was proposed by the Canadian energy giant Pembina to transport fracked natural gas through Oregon to the international port at Coos Bay in the state. It would include a new 232-mile pipeline that passes through several dozen miles of interior department land.

Several county commissioners from Colorado, where much of the gas is fracked, met with Bernhardt in Washington DC to boost the project in March. They included Mike Samson, Bernhardt’s former high school teacher.

As the Guardian reports, an email from GOP Garfield County Commissioner Mike Samson, who we didn’t know but aren’t surprised to learn was Bernhardt’s high school teacher (it’s a small world on the Western Slope), appears to have spilled the beans on Bernhardt’s inappropriate promotion of the controversial Jordan Cove LNG terminal, a project he was supposed to be hands off from as Interior Secretary to avoid a crystal-clear conflict of interest:

That’s an email from Commissioner Samson to Ray Bucheger, a lobbyist working on the Jordan Cove project–conveying information no doubt great news to him, but a smoking gun in terms of Bernhardt violating his confirmation hearing promises and even the Trump administration’s own rules. Readers may recall that Garfield County’s Republican commissioners including Samson made embarrassing footnotes of themselves with a half-baked attempt to hamstring local funds to Planned Parenthood, which resulted in that organization raising far more money from the publicity than they ever got from Garfield County.

It appears that they’ve gotten no smarter on the GarCo board of commissioners. This time it could do lasting damage.