Get More Smarter on Monday (August 12)

Today marks the second anniversary of the deadly white supremacist rallies in Charlottesville, Virginia. Let’s Get More Smarter. If you think we missed something important, please include the link in the comments below (here’s a good example). If you are more of an audio/visual learner, check out The Get More Smarter Show or The Get More Smarter Podcast. And don’t forget to find us Facebook and Twitter.

Legal immigrants who use public benefits — such as Medicaid, food stamps or housing assistance — could have a tougher time obtaining a green card or U.S. citizenship under a policy change announced Monday that is at the center of the Trump administration’s effort to reduce immigration.

The new policy for “Inadmissibility on Public Charge Grounds,” which appeared Monday on the Federal Register’s website and will take effect in two months, sets new standards for obtaining permanent residency and U.S. citizenship. The Trump administration has been seeking to limit those immigrants who might draw on taxpayer-funded benefits, such as many of those who have been fleeing Central America, while allowing more highly skilled and wealthy immigrants into the United States.

Wealth, education, age and English-language skills will take on greater importance in the process for obtaining a green card, as the change seeks to redefine what it means to be a “public charge,” as well as who is likely to be one under U.S. immigration law.

► If former Gov. John Hickenlooper drops his bid for President and instead decides to run for U.S. Senate, the road looks pretty smooth ahead. As the Denver Post reports, Hickenlooper would enter a crowded Democratic field of candidates as a heavy favorite to capture the nomination.

► It is entirely possible that people trying to recall State Sen. Brittany Pettersen believe that “State Senator” means Pettersen is a Senator for the entire state of Colorado. Either that, or they really have no idea where to find Lakewood.

► The latest episode of The Get More Smarter Podcast is now available for your listening pleasure. If you would rather read the transcript, here you go.

► “If I hadn’t been elected president we would be in a big fat juicy war with North Korea.” This is an actual thing said by the actual President of the United States of America during a weekend fundraiser in New York. This is not the most eyebrow-raising comment President Trump made over the weekend, as Rolling Stone reports:

► Colorado Secretary of State Jena Griswold will NOT seek the Democratic nomination for U.S. Senate in 2020.

► Colorado Sen. Cory Gardner (R-Yuma) has tried very hard over the years to avoid the general public and the majority of Colorado media outlets. Last week in Wheat Ridge, voters and reporters finally caught up to him.

► writing of Gardner, this is one gun safety ad that you need to watch immediately. Cindi Andrews of the Denver Post has more on this powerful new commercial:

Colorado’s Cory Gardner is one of two U.S. senators being targeted — along with Majority Leader Mitch McConnell — in a new ad campaign for not supporting a bill to require gun background checks.

Giffords, the group created by former Rep. Gabrielle Giffords, announced Friday that it intends to spend almost $750,000 to push for a Senate vote on H.R. 8, a bill passed by the House in February that requires any gun sale between private parties to go through a dealer for a background check.

► As Sara Fleming of Westword writes, it is America’s younger generation that is leading the charge for change on gun violence.

► Colorado Public Radio reports on a media tour of a controversial immigrant detention facility in Aurora.

► The Trump administration gives the environment another middle finger, as the Washington Post reports:

Three months after a U.N. report warned that 1 million species face extinction because of human activity, the Trump administration on Monday finalized rule changes to the Endangered Species Act that make it harder to protect plants and animals whose populations are in serious decline.

The rules, jointly announced by the Interior and Commerce departments, were changed as part of President Trump’s mandate to scale back government regulations on behalf of businesses. In that vein, language in the act that required officials to rely heavily on science when considering whether to place a species on the threatened or endangered list, regardless of economic impact, was erased…

…Administration officials said in a telephone news conference that the new rules will only affect future listings and will not be retroactive. But conservationists pointed out that the new rules would have made it nearly impossible to list the polar bear as threatened due to the loss of sea ice in Arctic, one of the fastest warming areas in the world.

► Oh, the irony: Russia is warning Google about attempts to interfere in its upcoming elections.

► As Politico reports, evangelicals may finally be getting tired of President Trump’s tendency to use “the Lord’s name in vain.”

► David Roberts of Vox.com looks at Colorado’s efforts to lead the way in the use of electric vehicles.

► If you are on the email list of the Trump campaign, you might have received this offer recently: 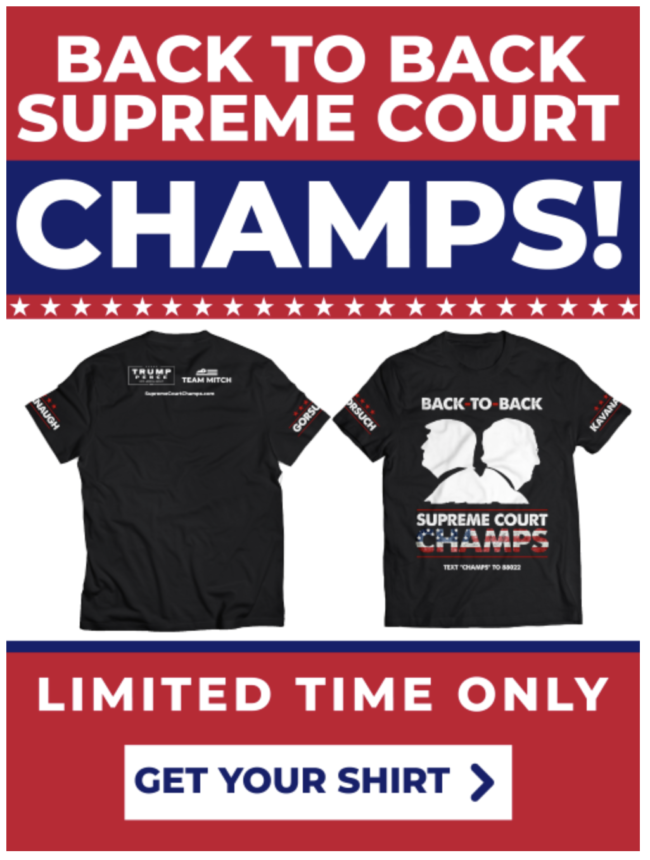 ► You probably can’t spell his name from memory, but this former Illinois Governor — currently sitting in a Colorado jail — might be getting himself a Presidential pardon. An official decision could come today.

► Former Congressman Mike Coffman is raising record amounts of money in his bid to become the next Mayor of Aurora. Coffman’s campaign manager in Aurora is literally named Aurora Ogg. That can’t not be helpful.