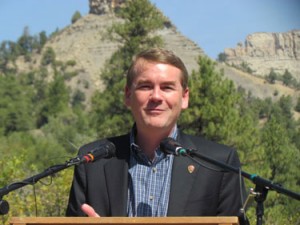 Colorado Public Radio reports on how Colorado’s other Democratic presidential contender Sen. Michael Bennet did in last night’s debate–like former Gov. John Hickenlooper the night before, doing what he could with the limited face time he was bound to get on a stage full of big names. And while there weren’t any flubs from Bennet, his last chance to break out of the depths of the presidential pack with a dramatic showing seems to have eluded him:

Colorado Sen. Michael Bennet focused much of his ire during the second presidential debate on the current occupant of the office he’s seeking.

“I believe we have a moral obligation to beat Donald Trump. He has to be a single term president. And we can’t do anything that plays into his hands,” he said…

Bennet’s loudest applause of the night came for his answer on how he would heal the nation’s racial divide. Drawing on his background as superintendent of the Denver Public Schools, Bennet said segregation in education remains a significant problem.

“Our schools are as segregated today as they were 50 years ago. We need a conversation about what’s happening now,” he said.

Bennet did spend some time attacking Sen. Kamala Harris’ health care plan, which was an odd choice given that her plan isn’t even as progressive as that of frontrunners not on last night’s stage like Bernie Sanders and Elizabeth Warren. But the exchange was collegial, and you got the sense that Bennet was making a point to not say anything overly injurious to other candidates while triangulating from their right.

Both Bennet and Hickenlooper took a similar tack in their respective campaigns for president, generally arguing that other candidates were too far left to beat Donald Trump in 2020. In both cases this campaign message failed to gain traction, mostly because it was out of touch with a Democratic base that is much more supportive of an unapologetic progressive agenda than most of its leadership. Hickenlooper in particular pigeonholed himself early on as the “anti-socialism” candidate, when smart Democrats realized that message played directly into the hands of conservatives–especially coming from such a longshot campaign.

At the same time, none of this was bad enough to rule either out of future contests, and the experience undeniably raised their name ID both in and outside Colorado. The political dynamic in Colorado, driven by a decisive unaffiliated plurality and a state still only tentatively considered blue after 15 years of Democratic electoral wins, is much better suited to the moderate image and message of both men–which helps explain why they both been successful in repeated statewide Colorado elections.

So…we’ll see what comes next.