Gardner Down on Herman Cain–But Not Because He’s a Lech! 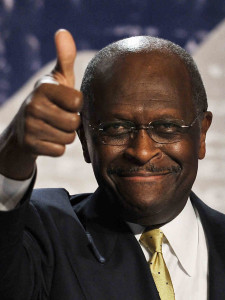 CNN reports on the latest Donald Trump-engineered minefield for Republicans up for election in 2020 to navigate, the forthcoming nomination of two controversial figures to serve on the board of the Federal Reserve: conservative columnist Stephen Moore formerly of the Wall Street Journal, and more controversially Herman Cain, the 2012 presidential candidate whose campaign collapsed under the dual revelations of Cain’s gross incompetence and extensive womanizing.

The concern over Cain in particular has grown so great that it appears Senate Majority Leader Mitch McConnell is taking the rare step of allowing Republican Senators to publicly grouse:

Aiming to avoid a public fight over the confirmation, some Republicans hope to persuade Trump to reconsider ahead of Cain’s official nomination.

The problem, as Sen. Cory Gardner of Colorado discovered shortly afterward, is that the “fight” is already public:

“No,” Sen. Cory Gardner of Colorado quickly responded when asked if he would support Cain.

But, says Sen. Gardner, and this is a key point:

“It’s not about his past. [Pols emphasis] It’s about who I think should be on the board,” the senator explained. “So that’s that.”

Unfortunately “that’s that” isn’t a satisfactory explanation in the least for why Sen. Gardner would oppose Cain’s nomination, yet specifically exclude Cain’s “past” from his reasoning. But there is an explanation for Gardner being cagey: in October of 2016, after the tape of now-President Trump bragging about his ability as a television star to sexually assault women surfaced to bipartisan condemnation, Sen. Gardner called on Trump to pull out of the race, saying “I cannot and will not support someone who brags about degrading and assaulting women.” In January, Gardner endorsed Trump’s re-election in 2020, saying he “likes” the President and thinks Colorado should get the chance to like him too. Gardner has yet to offer an explanation for this, uh change of heart that would reassure women voters who took him at his word the first time.

But once Gardner let Trump off the hook he can’t really condemn Herman Cain, can he? Or anybody else.

It’s kind of a problem.