Some Caucus Analysis — With Maps

Well, the results of last night’s caucuses haven’t been completely tabulated, but that shouldn’t stop me from making inferences, should it?  Don’t answer that.

Okay, on the Democratic side, here’s what the county map looks like.  I have calculated Romanoff’s share of the Romanoff + Bennet vote, ignoring the uncommitted for now.  Darker blue counties are those in which Romanoff did better.  The data come from here. 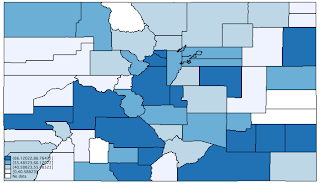 Now, the completely white counties are ones in which we don’t yet have numbers, so ignore those for now.  But what we do see is that Romanoff did well in the Denver metro area and even better in some of the central and southern counties.  Bennet’s areas of strength appear to be the northern plains areas and the western slope counties near Grand Junction.  Regression analysis shows that Bennet did better in counties with a higher percentage of college-educated residents, while Romanoff did better in wealthier counties.

Over on the Republican side, I calculated Jane Norton’s share of the Norton + Buck vote, ignoring the uncommitted and supporters of other candidates.  Darker red counties are those in which Norton did better.  The data come from here. 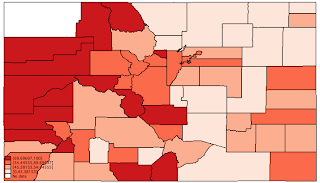 This map shows a strong regional pattern, with Norton doing much better than Buck in the western counties and Buck dominating the eastern plains.  This may partially represent the candidates’ upbringings: Norton is from Grand Junction originally, and Buck is the Weld County D.A. and has a long family history in Greeley.  So she’s the western slope candidate and he’s the eastern plains one (whereas we see less of a geographic pattern on the Democratic side with both candidates coming from Denver).  Regression analysis shows that Buck did significantly better in counties with a higher percentage of Evangelical Christians, although no other major demographic distinction between the candidates’ supporters turns up.