UPDATE: After a segment last night on 9NEWS recounting the Greeley Tribune’s story of anti-Semitic views held by organizers of a possible recall of Gov. Jared Polis, it looks like the Recall Polis organizers may be taking steps to come across as less overtly anti-Semitic:

In the aftermath of that report, a post went up on the Facebook group suggesting that one of its “high profile” leaders, presumably group administrator Judy Spady of “Israel did 9/11” infamy, has been excused:

“The highest standards of humanity”–now with one less Nazi! Here’s to getting the “vetting” right next time.

We feel better about the whole thing now, really.

On Sunday we blogged about a story from the Greeley Tribune’s Tyler Silvy, which took an unflattering look at some of the “grassroots” activists behind a Facebook group with nearly 30,000 members who are organizing for a potential recall of Gov. Jared Polis. At least two organizers of this group including its purported leader Shane Donnelley have made what can be characterized as highly anti-Semitic postings to social media over the years, to include commenting that ‘Hitler was good to the German people’ and another claiming that “Israel did 9/11.” Our blog of this report has spread fairly widely on social media along with the original story since Sunday, and Colorado Public Radio mentioned the story briefly in their interview on the subject with Gov. Polis yesterday.

Overnight last night, two people identifying themselves as principal organizers of the Recall Polis campaign, Christine Martinez and Juli-Andra Fuentes, responded at length to our post, perhaps mistaking us for the original outlet but in any event seeking to clear the air surrounding the Greeley Tribune’s disclosures and the intentions of the Recall Polis group.

Because we strive to be eminently fair, and also because we didn’t want to see any of this memorable response deleted once…well, you know, folks sobered up, we’ve reprinted Martinez’s two comments from the original post in their entirety after the jump. If you’re in a hurry, the TL;DR version: 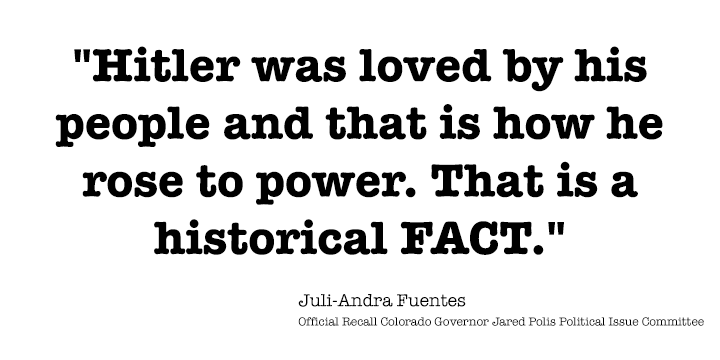 Needless to say, the “suggestion” that we take down our post is respectfully declined.

First, let me say it’s been more than (37) hours since you published this asinine article in the apparent hack of an online magazine, or ‘Politics, News & Inside Information’ organization that you purport to be. You must be a heck of a successful information resource if your article has only generated *(21)* comments in (37) hours since publishing the much-fabricated article you apparently believe is news, or inside information. <drips sarcasm>

Apparently you were asleep in your Journalism 101 class, because it’s obvious to anyone with optical-abilities to see you don’t know, nor follow the canons of journalism.

The nine principles are:

Beginning with the first, and most-important canon of journalism, it appears you took the word, or account of someone who’s either discontent, or who wishes to malign the ‘Official Recall Colorado Governor Jared Polis (ORCGJP)’ Facebook group. The fact that you failed to investigate the information which you published as factual, is exactly why I hope the leader of ORCGJP, Shane Donnelley, and EVERY member of this group (almost 29,000-strong!!) litigates the pants off of you. You can count on me to bring suit against you for LIBEL; it’s a very serious crime. You have failed the first principle of your profession, and it is on this basis that I surmise your entire literary organization a ‘hack’.

Secondly, I am a member of ORCGJP, and a Moderator for the group’s webpage. I have known Shane Donnelley through a mutual friend for approximately (5) years. I have never known him to express or display any sympathy to Nazis, or to admire Adolf Hitler. I have associated with him through multiple political-activist groups with a presence on Facebook for the same time, as we were in the same groups together. The group that we were in prior to the group name-change to ‘Official Recall Colorado Governor Jared Polis (ORCGJP) Political Issue Committee (PIC)’ February 26, 2019, was known as ‘Keeping Colorado Officials Accountable’, established July 8, 2018. I find it ironic, yet prophetic that our recall petition against Governor Polis will begin on the one-year anniversary of our former group name.

I am sure you are on a Liberal witch-hunt to smear this group and our mission, and therefore will attempt to categorize the group as ‘Nazis’, individually, or collectively, and that you intend to bully, intimidate, and denigrate the members of ORCGJP, so I want to be clear: I don’t attempt to represent that I speak for ANYONE else in the group, thus I refer you to contact Shane Donnelley, himself, or Juli-Andra Fuentes, the Media Administrator for the group, but I WILL tell you who *I* am:

“I am an unabashed, and concerned American, Coloradan, USAF veteran, patriot, Christian, mom, woman that actively engages in political issues, exercising my 1st Amendment U.S. Constitutional right to protest, and redress my government: Federal and State, to prevent disastrous policies from becoming legislation, or if passed, to be repealed.

I have also been active in the successful recall of two Colorado Senators: John Morse, and Angela Giron, and the resignation of Evie Hudak, in 2013.

I actively participated in, and protested Obama and his Administration’s policies & agenda, from ILLEGAL IMMIGRATION, to BENGHAZI;

I actively participated in, and protested Colorado legislation to restrict/ban magazines of select-fire capability rifles the uneducated call ‘assault rifles’;

I actively participated in, and protested the former CO Governor John Hickenlooper turning Denver, and ANY Colorado city into Sanctuary cities – which included protests at the Capitol, and a ‘Rolling March’ in November 2015, and a radio interview with a Denver radio show ((Sorry, but I don’t recall which one *right now*… getting old sucks.) I *THINK* it was KLZ 560 AM)), and a television interview with a reporter from a Denver Hispanic television station/subsidiary of a Denver television station;

I actively participated in, and supported a march to the Colorado Freedom Memorial in Aurora, by ‘Colorado Supports 1 Million Vets’, and Overpasses for America – Colorado (Denver) honoring the Colorado Army Reserve/Army National Guardsmen who lost their lives in EXTORTION 17, August 6, 2011;

I actively participated in, and supported organizations like: ‘III%ers of Colorado – Denver’ chapter, being appointed the first Secretary of ‘III%ers Colorado – Denver Chapter’ in August of 2014, as we sent III%ers to the Arizona-Mexico border to support ranchers, and property owners against ILLEGAL IMMIGRATION;

I actively participated in, and supported veteran organizations like ‘Concerned Veterans For America (CV4A) – Colorado, Denver’, by soliciting support from Americans to seek reform in the United States Veterans Affairs (VA), along with accountability;

I actively participated in, and was saluted as an Honorary member in the ‘Colorado’s Patriot Guard Riders’ organization, attending and presenting the Colors for veterans who received final burial honors – Final Roll Call – at the Fort Logan National Cemetery, and other veteran burials in private ceremonies;

I actively participated in, and supported relief efforts for victims of floods in several Colorado counties, I believe it was September 2014;

I’ve actively participated in, and supported ‘Mail Call’ on FaceBook since 2013, which honors our United States military branches, and servicemen/servicewomen: we sent (and send!) mail and care packages to deployed servicemembers in Iraq and Afghanistan.

I’m a member of this FaceBook group: the Official Recall Colorado Governor Jared Polis (ORCGJP), PIC, and have been since Day 1, and a Moderator for approximately a week. No, I didn’t start this group, but some of the men and women who serve as Administrators and Moderators, I have been with in former politically active FaceBook groups, such as Recall Hickenlooper (2017, and 2018). ORCGJP was started by Shane Donnelley, *THE* Administrator for this group, and he is the creator of this group and webpage.

Apparently you are used to dealing with Liberal, Progressive, Socialist snowflakes who wither and wilt under scrutiny. Let me tell you right now:

you are dealing with a COLORADAN, and I am COLORADAN-STRONG!!  The only withering to be done here is in your below-the-waist accoutrements. You fired the first shot, sir or madam. I’m shooting the last.

First, thank you for publishing my rebuttal letter to ColoradoPols.com, and the anonymous author who wrote the offensive article that accused the Official Recall Colorado Governor Jared Polis (ORCGJP) Political Issue Committee (PIC); its creator, and Lead Administrator, Shane Donnelley; other members of the Administrator & Moderator team, such as the Registered Agent, Media Administrator, and the Administrator of the GoFundMe account for the group, Juli-Andra Fuentes; and the members of this nearly-29,000 strong group, of being ‘Nazis’, individually, and collectively.

I am severely disappointed that you, an agent of ColoradoPols.com, chose to not only marginalize Juli-Andra Fuentes, but you chose to mark her comment as ‘Spam’, as if it were some worthless comment, beneath you to address.

Well, I am here to defend her right to rebut, and to give her voice back to her, as I submit her comments.

While your gratitude to me for “speaking the truth, caring about Colorado, and fighting for this country” looks good for you, the sentiment rings hollow as you sensationalize an already drama-packed issue: the recall of Governor Polis, and you fail to issue a swift, genuine letter of apology to ORCGJP and EVERYONE of its members, from the top of this group, to our base, our concerned Colorado constituents who are committed to having THEIR voices heard, finally, from their county commissioners and Sheriffs who are vowing to resist, and in fact, state emphatically they will NOT comply with the un-Constitutional GUN-GRAB of the Colorado Democratic legislators, to the overwhelming SUPPORT for Colorado’s oil & gas businesses and employees from the ENERGY-STRONG community!! We SHALL prevail!! The ‘sore losers’ of Colorado are about to SHOW Governor Polis the STRENGTH, WILL, and POWER of aggrieved (pissed off!) COLORADANS!!!

I expect to see a full retraction of your article, and the letter of apology. PRAY, that we are benevolent, sir.

Now, Juli-Andra’s comments, which include random letters and characters due to formatting conflicts: “View all posts by Colorado Pols”>Colorado Pols</a>&nbsp;- mamajama55 is&nbsp;right – *FAKE NEWS*. Can you say &quot;Defamation, Slander and Libel&quot;? Did anyone bother to ask the Registered Agent what she believes? No? Or you just decided to run with some smear campaign that started via&nbsp;con-man and Chief Thief, Tom ain’t Good. What happened to journalistic integrity???? There are OVER 29,000 people in the group and 1 or 2 bad apples do&nbsp;not represent the group or what we stand for. Neither Tom or Judy are a part of our group any more. They came and went as fast as they came. Tom left with ALL contributions made to our group and then went on a smear quest to create division in our group because they are afraid of what we WILL ACCOMPLISH TOGETHER. You also misrepresent what Shane said and failed to put it in context because the truth is, Hitler was loved by his people and that is how he rose to power. That is a historical FACT. Further, I am a student at the Israeli Institute of Biblical Studies and study Biblical Hebrew and attend a Messianic Church called The Way Congregation in Arvada. It might behoove you to retract and remove your slanderous and libelous hit piece. This is the only notice you will get – CEASE AND DESIST. ~ Juli-Andra Fuentes”