You Say You Want Another Shutdown, Well, You Know… 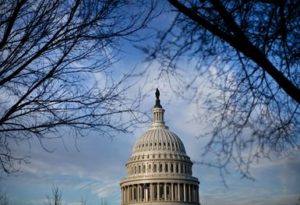 CNN reports as the roller coaster that is national American politics under President Donald Trump gets ready for another dive into chaos:

It’s now days before another government shutdown — and this is the day bipartisan negotiators were supposed to announce a deal to avert just that.

Instead, there are no clear answers as to how, or if, another can be avoided.

Bottom line: There is no agreement on the path forward on the conference committee. There is no agreement on what, if any, alternatives could pass both chambers and be signed by the President if the conference committee fails. Monday is a crucial day as lawmakers try and figure a way out of another mess, all as the clock ticks away. At this point, each day leading into the February 15 deadline is enormously consequential.

As negotiations on a spending bill to avert another shutdown by Friday’s deadline continue today, the pressure is on to get a bill together today or tomorrow in order to respect the House’s 72-hour rule for considering legislation once the bill text is posted. The parties remain far apart on both funding for the wall/barrier/slats/whatever, but also related issues like the number of beds for detaining immigrants awaiting hearings. Looming over all of those disagreements is the current state of Trump’s thinking, which may become more apparent at a MAGA rally scheduled for this evening in El Paso, Texas.

You would think that after the havoc wrought by the recently-ended shutdown, and the consensus of public opinion that Trump and the GOP are to blame, Republicans would be willing to take whatever House Democrats offer to save face and move on with their lives. There’s still the possibility of that happening, but it’s not a bet we would make with, you know, the rent money.

For hundreds of thousands of federal workers, though, that’s exactly what the next few days is about.