Time To Hang Up And Drive, Colorado? 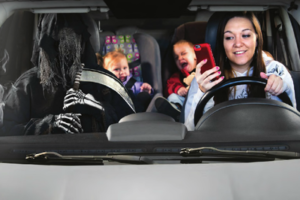 CBS4’s Shaun Boyd reports on a perennial bill introduced in the Colorado legislature that, while it hasn’t passed in previous sessions, might see a different outcome this year in under unified Democratic control–legislation to expand on the state’s existing ban on texting while driving to requiring drivers to be fully hands-free if the call truly can’t wait:

“This is designed to stop dangerous behavior,” said Court…

Opponents, including the ACLU and Colorado Criminal Defense Bar, say the bill goes too far, equating holding a phone while driving with reckless driving.

“Bills like this become symbolism, they don’t give you results,” Denise Maes with the ACLU told lawmakers.

A vote on Sen. Lois Court’s bill was delayed following testimony yesterday to give proponents a chance to make changes suggested during the hearing. Banning holding a phone while driving isn’t a proposal that necessarily has clean partisan cleavage, and there are legitimate countervailing public safety and personal freedom arguments to consider. Much the same way they say “a conservative is a liberal who’s been mugged,” it’s possible that your view of this bill will depend on how close you’ve personally come to being in a space-time conflict with a driver distracted by their phone.

A poll follows–good idea, or trampling your sacred right to screen addiction?