Trump Mocks Kavanaugh Accuser and Draws Ire of Many 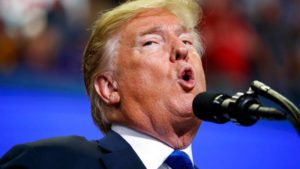 Trump, in a riff that has been dreaded by White House and Senate aides, attacked the story of Christine Blasey Ford at length — drawing laughs from the crowd. The remarks were his strongest attacks yet of her testimony.

“‘I don’t know. I don’t know.’ ‘Upstairs? Downstairs? Where was it?’ ‘I don’t know. But I had one beer. That’s the only thing I remember,’ ” Trump said of Ford, as he impersonated her on stage.

“I don’t remember,” he said repeatedly, apparently mocking her testimony.

Ford has said the incident happened in an upstairs room and that she is “100 percent” certain it was Kavanaugh who assaulted her, although she has acknowledged that her memories of other details of the evening remain unclear.

As CNN reports, two Republican Senators who could be key to Kavanaugh’s confirmation — Arizona Sen. Jeff Flake and Maine Sen. Susan Collins — were not at all pleased with Trump’s comments:

“There’s no time and no place for remarks like that. To discuss something this sensitive at a political rally is just not right. It’s just not right. I wish he hadn’t had done it,” Flake told NBC’s Savannah Guthrie on “Today,” adding, “It’s kind of appalling.”

Collins, a Republican from Maine, similarly condemned Trump’s comments, telling CNN’s Manu Raju they “were just plain wrong.” She would not say if the remarks would affect her vote.

Trump’s attack on Ford was so disgusting that even the Trump-loving hosts of “Fox and Friends” criticized the President for his remarks.

But not all Republican Senators stuck with a remorseful stance. South Carolina Sen. Lindsey Graham had this weird thing to say:

“President Trump went through a factual rendition, and I didn’t like it. I would tell him to knock it off — it’s not helpful,” Graham said at the “Atlantic Festival” in Washington. “But it can be worse, someone could be dead.”

Meanwhile, Senate Judiciary Chairman Chuck Grassley says that an FBI investigation into claims of sexual assault against Kavanaugh is getting close to being completed. From Politico:

Grassley said Wednesday the FBI report on Supreme Court nominee Brett Kavanaugh is “very close,” but the Iowa Republican would not predict when the high court hopeful will get a vote.

“I think it’s very close,” Grassley said. “I have not talked to the FBI, and I don’t think I should talk to the FBI. People that seem to know said it’s getting close, but when, I haven’t heard.”

If the FBI report on Kavanaugh reaches the Senate by Wednesday, Grassley said a critical cloture vote on the nomination could come as early as Friday, although he said the final decision on timing is up to Senate Majority Leader Mitch McConnell (R-Ky.).

It also remains to be seen what Senators will do about Kavanaugh’s apparent lies to the Senate Judiciary Committee regarding when he heard about accusations from another woman, Boulder resident Deborah Ramirez. As Vanity Fair writes, Kavanaugh’s story on Ramirez is “unraveling.”