Get More Smarter on Friday (September 7) 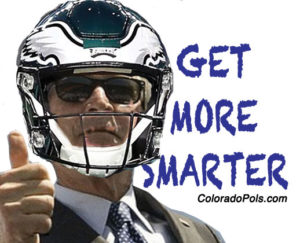 Take THAT, glass ceiling. It’s time to Get More Smarter. If you think we missed something important, please include the link in the comments below (here’s a good example). If you are more of a visual learner, check out The Get More Smarter Show.

► President Trump is flipping out over that anonymous Op-Ed published by the New York Times on Wednesday afternoon. On Friday Trump said that the Justice Department should try to identify the author because it is a national security concern, but as the Washington Post writes, “It is unclear what law he believes was broken.”

Meanwhile, the New York Times reports that the White House has identified 12 potential suspects who might have authored the Op-Ed.

Who do you think is the author of the infamous Op-Ed? Cast your vote in our poll.

► Colorado Attorney General Cynthia Coffman is suing Purdue Pharma L.P. over the company’s marketing and distribution of the dangerous painkiller Oxycontin. This will be a big issue in the race to succeed Coffman in November; Republican candidate George Brauchler has been reluctant to say much about the opioid epidemic because his campaign is heavily-funded by the pharmaceutical industry.

► How’s this for a change? The House Freedom Caucus may actually be trying to prevent a government shutdown.

► As we told you on Thursday, the Republican candidate for State House in HD-12 (Louisville/Longmont) is absolutely, positively bananas. Later in the day David Reid Ross decided to withdraw from the race altogether.

► Confirmation hearings for President Trump’s Supreme Court nominee have included a heavy discussion of abortion rights and where Brett Kavanaugh may (or may not) stand on repealing Roe v. Wade. These conversations mean that state decisions could be more important for preserving pro-choice rights; Republican gubernatorial candidate Walker Stapleton won’t say where he stands on abortion other than a generic “I will be a pro-life Governor” statement.

► Would Brett Kavanaugh go out of his way to protect judges from the wrath of a certain President of the United States. Probably not, if Kavanaugh’s own words are to be believed.

► The Pueblo Chieftain examines how Colorado’s U.S. Senators are approaching the confirmation process for Brett Kavanaugh.

► The Washington Post breaks down President Trump’s staffers try to steer him away from trouble:

This week’s revelations of a purported “resistance” force of senior government officials acting as guardrails against President Trump — manipulating him, infantilizing him and ignoring his directives — raised the specter of a shadow administration.

“Who’s in charge at the White House?” a reporter shouted at Trump on Thursday as he departed for a rally in Montana.

The president did not answer.

An anonymous op-ed in the New York Times, from someone identified only as a senior official, and a new Bob Woodward book, “Fear,” detail efforts at the highest levels of the government to contain Trump’s impulses and, in the most extreme cases, defy and even undermine his orders.

The successive disclosures crystallized what has long been evident throughout the Trump presidency — a cadre of administration officials alarmed by the whims and wishes of a chief executive they view as mercurial and impetuous working to curb his instincts on a range of issues, including national security, trade and immigration.

► Former President Barack Obama delivered a rare public speech on Friday at the University of Illinois in which he wondered aloud about how the Republican Party had devolved into its current state. As Politico reports:

Laying out a brief history of America — starting with George Washington’s decision to step out of public life after leaving the presidency — Obama framed the 2018 elections as more significant than ever before.

And for the first time since leaving office, he said Trump’s name.

“It did not start with Donald Trump. He is a symptom, not the cause,” Obama said, to applause. “He’s just capitalizing on resentments that politicians have been fanning for years.”

It’s not just about Trump, he said. It’s about Republicans “who know better in Congress … bending over backwards to shield” Trump. They’re hypocrites, he said, and they’re just as dangerous to America. At times mocking them and at times laying into them, Obama said they’ve abandoned all that they’re supposed to stand for as Republicans, and as citizens of this country.

► If House Republicans are somehow able to maintain their majority after November, there will be a significant battle over who gets to lead the GOP.

► Business owners from across the Western United States are heading to Washington D.C. to advocate for full funding of the Land and Water Conservation Fund (LWCF).

► Congressman Mike Coffman (R-Aurora) is being targeted in a new TV ad over his long history of accepting large sums of money from corporate contributors.

► Democrats are generally outperforming Republicans in fundraising for state legislative seats, but as the Colorado Independent notes, the GOP is counting on big money from outside interests to bail them out.

► Denver’s housing market seems to be slowing down, with inventory reaching its highest level in four years.

► Someone apparently did inform Jefferson County Clerk and Recorder Faye Griffin that the midterm election takes place this year.

► President Trump says that he is misquoted or misinterpreted in Bob Woodward’s upcoming book “Fear,” which paints a bleak picture of the White House. Trump says, “I don’t talk the way I am quoted” in Woodward’s book, which doesn’t get released until next week. For this statement to be accurate, you would have to believe that Trump has actually read some of the book.

► The new NFL season kicked off on Thursday night (the Denver Broncos host the Seattle Seahawks on Sunday afternoon). The Washington Post uses this news peg for an interesting story about how the NFL may have ultimately hurt itself by wrapping football games in the patriotism flag:

“It almost feels like it’s a mandatory patriotism that is pushed down the throats of anybody who wants to attend a game,” said former Army Ranger and author Rory Fanning, who has become a vocal critic of America’s wars. “By trotting out veterans, patting them on the back, I don’t think it does justice to the actual experience of veterans, particularly over the last 18 years. There certainly isn’t an opportunity for veterans to talk about their experiences in combat. So many veterans don’t feel like the heroes the NFL wants to present them as.”