At Least He’s Not Your Congressman 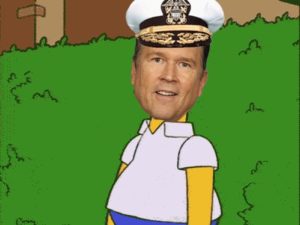 Welcome back to our long-running series, “At Least They’re Not Your Legislator.” For today’s, uh, episode, we take you to Florida, where Republican Rep. Vern Buchanan is getting hammered for what appears to be an egregious example of a “loan-to-play” agreement.

From the Florida Center for Investigative Reporting:

U.S. Rep. Vern Buchanan (R-Sarasota), who sits on the House Ways and Means Committee and leads its tax policy subcommittee, has been under fire in recent weeks for purchasing a yacht on the same day he voted for the GOP tax package. Buchanan registered a 73-foot Ocean Alexander vessel named Entrepreneur with the U.S. Coast Guard a month later, according to federal records. [Pols emphasis]

Although Buchanan is one of the wealthiest members of Congress — worth at least $80 million — federal records show one of his limited liability companies financed the purchase with a BMO Harris Bank loan worth as much as $5 million. Since 2016, Buchanan’s companies have received three loans worth as much as $35 million from BMO Harris, which is the American subsidiary of the Bank of Montreal. In total, since he was appointed to the Ways and Means Committee in 2010, Buchanan and his companies have received between $17 million and $85 million worth of loans from four lenders.

If “BMO Harris Bank” sounds familiar to you, it should:

The bank’s first annual report after the passage of the GOP measure said corporate tax cuts in the bill are “expected to increase our annual net income from what it would have otherwise been.” In late May, shortly after its report was published, the company announced record U.S. profits. BMO Harris had publicly celebrated the bill in January and said it would increase its minimum wage to $15 per hour as a result of the tax cut. Both the Trump administration and House Republicans touted BMO Harris as an example of the tax cut’s success. [Pols emphasis]

The bank also announced a plan to repurchase as many as 20 million shares of its own stock — providing ammunition to critics who predicted that companies would use the tax cut windfall to enrich executives and shareholders, rather than to create new jobs.

The Republican tax plan crammed through Congress in late December hasn’t done much for the average Joe, but it’s been wonderful for the top 1% of Americans…and elected officials like Vern Buchanan.