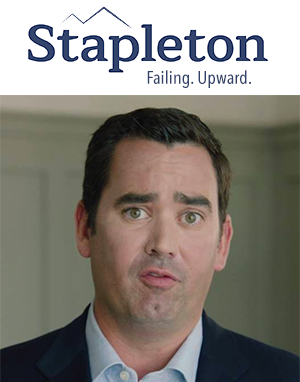 The primary elections in Colorado are over. Now we know what we’re up against.

In the governor’s race, the Party of Trump has nominated Walker Stapleton–a walking, talking example of everything that’s wrong with politics in America today. Stapleton ran on a campaign of embracing Donald Trump, who is wildly unpopular in Colorado, going so far as to feature Trump in every single ad Stapleton ran in the primary.

Is that what Colorado is looking for in a governor? Help us take the fight to Stapleton right now. We can’t let Trump policies and ideals run our state.

Walker Stapleton, the conservative insider choice, has been a disaster as state treasurer. Stapleton has a spotty record of showing up to the Capitol to work, and when he does it’s a train wreck. Stapleton kept a part-time job with his former company, SonomaWest, while serving as treasurer. As a result, Stapleton missed almost half the board meetings of the Public Employees Retirement Association while continuously advocating to cut retirement benefits for hardworking Coloradans. The well-documented failures of the taxpayer-funded million dollar “Fake” Colorado Payback ad program, which Stapleton uses to build his name recognition with voters, provide yet another example of Stapleton’s incompetence.

Now he’s asking for a promotion, when any other company in the world would have fired him by now. Help us hold Walker Stapleton accountable.

If that wasn’t enough, Stapleton’s campaign in the Republican primary was such an historic disaster that it’s a real surprise he even won. First Stapleton was caught soliciting funds for his own ‘independent’ SuperPAC. Then Stapleton’s campaign was exposed for having relied on fraudulent signatures to qualify for the primary ballot. Then Stapleton put out an ad that was so blatantly false that every fact-checker in the state condemned it, taking the extraordinary step to call it an outright lie—and then Stapleton stubbornly refused to take the ad down, promoting one reporter to say on the air, “if Mr. Stapleton doesn’t want to be called a liar, then he should stop saying something he knows is false.”

The choice for Colorado voters in November could not be more clear. This is a choice between a bright future of fairness and opportunity for Colorado versus the ugly politics of the past that Stapleton and Trump represent. From now until November, ProgressNow Colorado will be working overtime to make sure every voter in Colorado understands what’s at stake.

But we can’t do it without you. Donate now to ProgressNow Colorado, the state’s largest multi-issue progressive advocacy organization, and help us fight back against Stapleton and the backwards right-wing in this critical election year.