UPDATE: Trump also reportedly considering a pardon of Martha Stewart and former Illinois Gov. Rod Blagojevich (now a guest at Colorado’s own FCI Englewood). Both appeared on Trump’s reality TV show The Apprentice, which could now be the ultimate get-out-of-jail-free card. 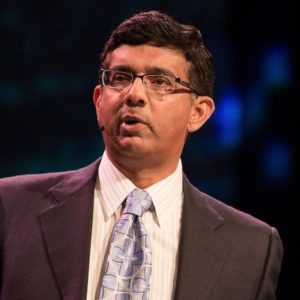 President Donald Trump announced unexpectedly Thursday that he is granting a full pardon to Dinesh D’Souza, the conservative author and filmmaker who pleaded guilty to violating federal campaign finance laws in 2014. He was indicted earlier that year on charges that he illegally used straw donors to contribute to Republican Senate candidate Wendy Long in New York in 2012…

D’Souza is a contentious figure who once accused then-President Barack Obama of adopting “the cause of anti-colonialism” from his Kenyan father in a 2010 Forbes magazine cover story when Obama was in office. In the piece, he referred to Obama’s father as a “philandering, inebriated African socialist, who raged against the world for denying him the realization of his anticolonial ambitions.” He also once argued that Adolf Hitler was not “anti-gay.”

“Dinesh D’Souza is an individual who, you know, has made restitution and accepted responsibility for his actions, but these are infractions and crimes that are rarely prosecuted, and many believe that he was the subject of some selective prosecution from the previous administration,” White House deputy press secretary Raj Shah said on Fox News Thursday.

Whether or not you think conservative shock-jock Dinesh D’Souza deserved to be prosecuted for his violation of federal campaign finance law, D’Souza’s fame in conservative circles has mostly been derived from his willingness to say the most offensive, frequently race-baiting, not to mention fact-free things you can imagine–and somehow be excused for it simply because D-Souza himself is a person of color. D’Souza is certainly not alone in this particular niche of the conservative mediasphere, but he is one of the most consistently…well, really just nasty about it.

OVERRATED DEMOCRATS DEPT: So Rosa Parks wouldn’t sit in the back of the bus–that’s all she did, so what’s the big fuss?

With that said, we see little evidence that his campaign finance conviction has been a career problem for D’Souza, who remains on the for-hire Republican dinner circuit–including earlier this month in Pueblo. As you can see above, D’Souza is right up Rep. Judy Reyher’s alley! It might make you and anyone else with an accredited education in American history cringe, but there’s a ready market for this stuff.

Aren’t you glad this man has been legally rehabilitated?