Trump Craps All Over Jeff Sessions 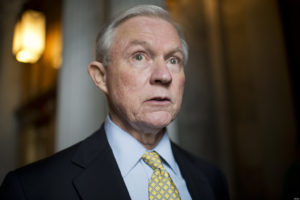 CNN reporting on a story that will make, amongst others, Colorado stoners happy:

President Donald Trump said Wednesday he regretted choosing Jeff Sessions as attorney general, a continuation of the President’s frustrations over Sessions’ decision to recuse himself from the Russia investigation.

Quoting Rep. Trey Gowdy, R-South Carolina, who noted on CBS earlier Wednesday that Trump “could have picked somebody else” for the position, Trump tweeted, “I wish I did!”

…Trump has frequently criticized Sessions over his recusal, which paved the way for Deputy Attorney General Rod Rosenstein to appoint special counsel Robert Mueller to investigate Russian meddling in the 2016 election. Trump, according to The New York Times, has said he needs an attorney general to protect him.

Attorney General Jeff Sessions’ bellicose threats against legal marijuana have given the rapidly-growing industry in Colorado the most stress they’ve endured since legalization in 2012, but it does appear that he lost the battle for President Donald Trump’s blessing to carry out the crackdown he so badly wanted. That’s the local angle of relevance in this story–Sessions’ lack of favor with Trump being a positive development for Colorado’s marijuana industry–though obviously, Sessions’ recusal from the investigation into involvement by Russian nationals in the election of Trump is the factor driving the day.

Will Sessions survive in his position long enough to headline the Western Conservative Summit in Denver in less than two weeks? We’ll all have to find out together.