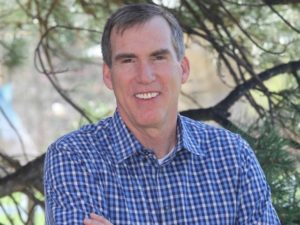 A leading Republican candidate for governor told a talk radio host Saturday that he voted for a constitutional amendment that, if it hadn’t been overwhelmingly defeated by Colorado voters, would have banned all abortion, even for rape, and possibly some forms of birth control.

Asked by KNUS 710-AM host Craig Silverman if he voted for the “personhood amendment,” which would have bestowed legal rights to fertilized human eggs, also called zygotes, Robinson said, “I sure did, yeah.”

Robinson went on to tell Silverman that although he’s “pro-life” and has been his entire life, his anti-abortion stance would not “be the main focus of my administration.”

“I am pro-life,” said Robinson on air. “I don’t expect this is going to be the main focus of my administration. You know, I’m going to be focused on really making lives better every day for Coloradans, in terms of our roads and our schools, reducing the cost of health care. Those are going to be my priorities.”

Robinson’s opponents in the GOP primary apparently haven’t been asked about their support for a personhood amendment, which was a major issue in the 2014 senatorial election here, with U.S. Sen. Cory Gardner saying he supported a personhood bill in Congress but opposed an nearly identical amendment here in Colorado–even though he’d previously supported state personhood measures in Colorado as well.

Treasurer Walker Stapleton, the Republican front runner for governor, hasn’t said much about his abortion stance, though he vowed to protect the “born and unborn” during his April speech at the Republican state convention. Republican Greg Lopez didn’t return an email asking about his stance on personhood and abortion-related issues. Democrats in the gubernatorial race are pro-choice.

The personhood amendment that Robinson supported didn’t include exceptions for rape or incest. But Robinson told Silverman that he supports such exemptions, stating, “I believe in exceptions for the life of the mother, for incest, for rape. I do. But I believe in the sanctity of life.”

At one point in his KNUS interview, Robinson said that “ultimately the abortion issue is decided federally. And there are some things that the governor has to say on it.”

Silverman pointed out that states across the country have passed laws limiting access to abortion by requiring, among other things, a 24-hour waiting period, a mandatory ultrasound to see an image of the fetus, and abortion counseling prior to having the procedure. Colorado has passed similar legislation.

Robinson replied that he’d have to “look at that legislation” before saying if he’d sign it, if he were governor and it passed the legislature. He said he thinks it’s “very unlikely” that such legislation will pass in Colorado, in part because Republicans are “really doing everything we can just to hold the senate this cycle.”

The Colorado house is controlled by pro-choice Democrats.

Listen to Robinson’s May 26 interview here: