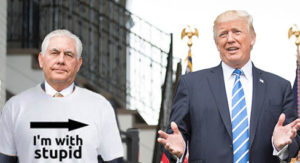 As CNN reports, former Secretary of State Rex Tillerson has some harsh words about President Trump:

In a rare public address following his removal from office in March, former Secretary of State Rex Tillerson told graduating cadets at the Virginia Military Institute on Wednesday that respect for truth is paramount to American democracy.

“If our leaders seek to conceal the truth, or we as people become accepting of alternative realities that are no longer grounded in facts, then we as American citizens are on a pathway to relinquishing our freedom,” Tillerson said in the commencement address, which was scheduled before he was fired by President Donald Trump in March. [Pols emphasis]

Tillerson has shied from the limelight since his dramatic ouster earlier this year, and has stopped short of any direct criticism of Trump or his administration. His comments on Wednesday are especially notable because Tillerson was recently fired by Trump, whose presidency has been marked by frequent falsehoods and embellishments. He did not mention the President or any other member of the administration by name in his Wednesday speech.

The truth shall set you free, Rex.