Chris Holbert and the Baumgardner Cover-Up 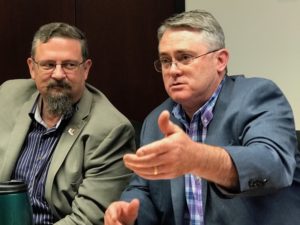 Senate President Kevin Grantham and Senate Majority Leader Chris Holbert have steadfastly refused to discipline Sen. Randy “Boob Grabber” Baumgardner over multiple claims of sexual harassment that occurred over a period of several years. Grantham and Holbert’s inexplicable protection of Baumgardner is certainly not a new story, but this now-familiar tale may be turning the corner into a full blown cover-up.

If you take a second look at some of the most recent reporting from KUNC reporter Bente Birkeland (whose work on sexual harassment at the State Capitol was recognized by the Society of Professional Journalists), you can start to piece together what would appear to be a calculated effort to withhold information that could have led to Baumgarner’s expulsion from the Senate. Here’s the key paragraphs from a story Birkeland published on Monday about details of a second investigation into harassment allegations by the company Alternative Dispute Resolutions (ADR):

The report is dated March 30, 2018, Good Friday, a day off for legislators and staff. The following Monday, April 2, the ADR investigator, Kathryn Miller confirmed to our sources that she had submitted her findings to Senate Secretary Effie Ameen. That was the same day Republican Senate Majority Leader Chris Holbert, who controls the chamber’s calendar, scheduled  an unexpected vote on a Democratic resolution to expel Baumgardner after weeks of pressure from Democrats to do so. [Pols emphasis]

Yet the additional details were not considered in the expulsion vote, only the findings of a single investigation that concluded  Baumgardner more likely than not grabbed and slapped a former legislative aide’s buttocks. While Ameen had the new findings, the investigations were still considered to be open until April 11 because the investigator stated Baumgardner was refusing to be interviewed. She said his actions held up the release of the report by about a month.

Birkeland’s story on Monday did not include a response from Sen. Holbert about why a resolution to expel Baumgardner was introduced before results were made public about the second (ADP) investigation, but here’s how she followed up via Twitter:

NEW: When asked why he scheduled Baumgardner’s expulsion vote when pending investigations were almost finished, @Chris_Holbert said he doesn’t control the calendar, the senate secretary does. But his memo says otherwise (1/2)#coleg #copolitics #cogov

Holbert’s excuse for the timing of the Baumgardner resolution is that “he doesn’t control the calendar.” The problem with this answer is that one of Holbert’s jobs as Senate Majority Leader is to schedule resolutions in the State Senate. Holbert would have a hard time arguing this point since Birkeland has a copy of a January memo from his office in which Senate Secretary Effie Ameen expressly conveys this process to legislators:

Resolution calendaring requests must be given to Keri Brehm in the Majority Leader’s office at least ONE WEEK in advance of the date you wish for that Resolution to be heard.

The ADR report was submitted to State Senate leaders on April 2 — the same day that a resolution was unexpectedly called to debate Baumgardner’s expulsion. That resolution failed by a near-party line vote (Republican Sen. Ray Scott voted yes, but “Independent” Sen. Cheri Jahn was a ‘NO’), but it’s fair to wonder if the outcome might have been different had lawmakers been aware of the results of the second investigation into claims of sexual harassment against Baumgardner.

State lawmakers will adjourn in May without actually addressing the culture of sexual harassment, and here’s where this becomes particularly important: If Republicans maintain control of the State Senate in November, Chris Holbert will be the odds-on favorite to become the next Senate President. That’s the same Chris Holbert who appears to have covered up the results of a second investigation that likely would have resulted in Baumgardner’s ouster from the Senate — which would make it even more difficult for the GOP to maintain their Senate majority.

There’s no such thing as an honest cover-up.