UPDATE #8: Steve Lebsock is expelled from the legislature by a vote of 52-9 (4 members excused). 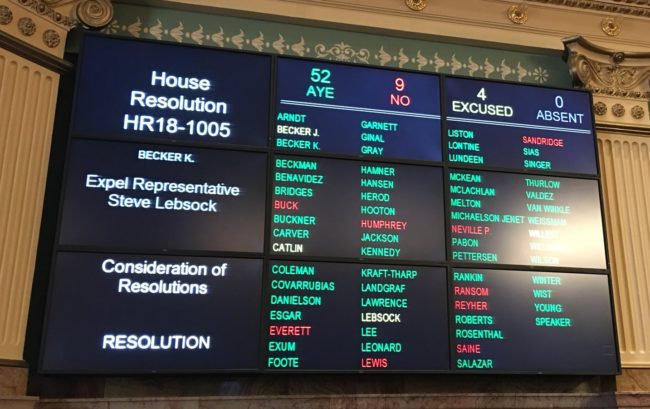 UPDATE #7: The moment of truth approaches:

Multiple members from both parties now tell me they believe there are enough votes to expel @RepLebsock.
We may see soon, though there are several pleading with him to resign to avoid the vote.
It takes 44. (Two thirds.)#LebsockVote #coleg #9news

UPDATE #4: Stunning drama on the floor of the Colorado House moments ago:

VIDEO: For me….this was the most powerful moment on the House floor today. @AlecGarnett admitting he is wearing a bulletproof vest — fearing possible action by by Rep. Lebsock. #coleg #KDVR pic.twitter.com/xZKkBQ0c7f

UPDATE #3: GOP Rep. Larry Liston (R) becomes the first Republican to announce he will vote to expel Rep. Steve Lebsock. Liston says he was a “NO” vote when he arrived at the Capitol this morning, but has changed his mind after hearing discussion today.

Assistant Minority Leader Cole Wist suggested a potential path for Republicans to vote to expel, despite their shared concerns over the investigation.

House Majority Leader KC Becker, who introduced the measure to expel Lebsock, started the hearing off by saying the Legislature would be “letting down everyone in Colorado who could lose their job for a lesser offense.”

Rep. Faith Winter, D-Westminster, who was one of Lebsock’s alleged victims and who was allegedly propositioned by Lebsock at a party after the 2016 legislative session, started the hearing with an emotional speech saying that the evidence against Lebsock was overwhelming and that he’d retaliated against her and the other women who had come forward.

“Today is not just about me. This is about at least 10 other people. Ten others spoke to a reporter, 5 others filed complaints, 3 went on record with the media, plus the several other women that I have talked to that were harassed by this individual who were too scared to come forward,” Winter said. “Ten others that have felt their hearts race, felt intimidated and have felt bullied by this individual. Ten others that their place of work was changed forever. Today is not about sex; it is about power. Sexual harassment is about power and the power that this individual wielded over others.”

Follow along with us as the first debate over expulsion of a sitting Colorado legislator in 103 years goes on in the Colorado House this morning:

We’ll update as developments warrant. Already two Democrats considered on the fence on the expulsion of Rep. Steve Lebsock have announced they are yes votes, while Rep. Faith Winter’s powerful statement brought the entire House gallery silently to their feet.