UPDATE: President Trump is now “all in” on supporting Moore, as CNN reports:

Trump had hesitated to throw his full support behind the embattled Republican candidate in the wake of explosive accusations against him. His tweet Monday comes as recent polls show a close race…

“Thankful for President Trump’s support. The America First agenda will #MAGA. Can’t wait to help him #DrainTheSwamp. #ALSEN” he tweeted. 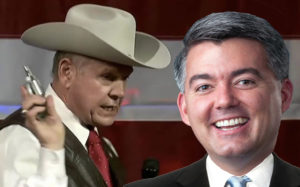 Politico reporting, Senate Majority Leader Mitch McConnell is sounding the retreat from previous statements that accused child molester Roy Moore should be expelled from the U.S. Senate in the event he wins the December 12th special election in Alabama–leaving Sen. Cory Gardner of Colorado, whose National Republican Senatorial Committee (NRSC) pulled support from Moore and who also called for Moore to be expelled if he wins…

We believe the correct description is “with his ass hanging in the breeze.”

Multiple women have accused Moore, who is facing Democrat Doug Jones in the Dec. 12 special election to replace Attorney General Jeff Sessions, of making sexual advances on them when they were teenagers. When the allegations first appeared, McConnell said he believed the women and said Moore should drop out of the contest.

“I’m going to let the people of Alabama make the call,” McConnell said on ABC’s “This Week.” He said he thought the Senate Ethics Committee would handle the allegations against Moore if he is elected: “The ethics committee will have to consider the matters that have been litigated in the campaign should that particular candidate win.”

That’s well short of a vote to expel, of course–and just like Cory Gardner quietly ate his words after calling for now-President Donald Trump to pull out of the presidential race last October, you can now officially start the vigil for Gardner to commence backpedaling on Roy Moore as well. It would be preferable to see reporters track that change as it occurs, rather than allowing him to “go dark” for the next week and issue the inevitable “everybody should have the opportunity to live down pedophilia” statement once Moore’s accession to the U.S. Senate is a fait accompli.

These signals coming from the highest Republicans in the land that they are ready to capitulate to Moore are the best tacit support they can possibly give Moore and his embittered hard-right base. With over a week left before the election for this reality to be absorbed by Alabama voters, Moore’s election–and the greatest moral moment of truth for Republicans since Trump himself–is once again the most likely scenario.

There is of course the possibility that Gardner could surprise us, but we have no reason to expect it.

At this point, absolutely none.